A stairway connecting the Earth to the Heavens that takes the human mind to the highest levels.

The Tarocchi del Mantegna depicts an ordered, philosophical system containing the human, scientific, spiritual, astral and esoteric knowledge known to humanity at the birth of the Renaissance.  More than a “game", it is believed that the images were originally used as a tool to transmit this knowledge and show the path or stations one should follow in order to progress in these realms.

This spectacular deck is now available in a limited limited edition of 700.  The artistic project was edited by Giordano Berti of Rinascimento Italian Style Art in 2020.  The images are flawlessly reproduced from an original series produced in Germany in 1540 by Johann Ladenspelder.  The Cards Measure 2.9" x  5.5 and include titles in six Languages.  The set is housed in a beautifully handcrafted 2 piece Italian Art Box box designed by Letizia Rivettia.

In the full color 100 page manual that accompanies the set, Giordano Berti reveals for the first time the true origins of the deck and of each image that compose it; then, he shows their similarities with the classic Tarot, explains the wonderful philosophy of this Tarot, that unites the celestial Spheres with the ranks of the Angels, the Virtues, the Arts and the different human conditions.

The original Mantegna prints are housed in the most prestigious museums and intuitions around the world. This set is sure to be a treasured centerpiece of any fine Tarot collection.

Rinascimento Italian Style Art is a creator, publisher and artistic team founded by historian of esotericism in art Giordano Berti and art designer Letizia Rivetti. The project is committed to historical study and reproduction of ancient Tarots, rare playing cards and oracular decks..

Giordano is a writer and historian of esotericism in Art, known throughout the world for historical studies on the Tarot and for the design of educational games 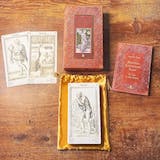